Best Day with Bruce and Brady 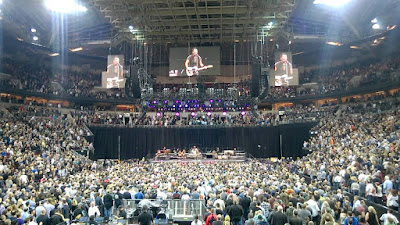 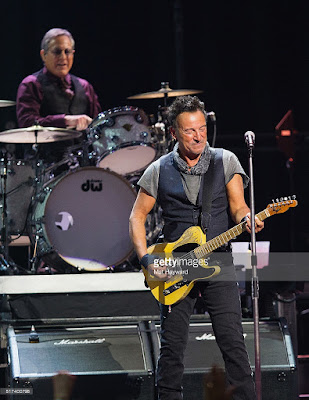 I've written before about what I call best days--experiences filled with joy, adventure, something new; days that make me feel alive and fulfilled.

Last Thursday was one of those days. I took Brady to see Bruce Springsteen in concert. It was my 12th time seeing him; Brady's first. What an event for his first concert ever!

He is still young enough to let me control the music most of the time, and over the years has really enjoyed listening to Bruce. When the tour was first announced, I was bummed that it wasn't coming to the Pacific Northwest.

But a few weeks into the tour, they announced new cities--including Seattle. I was on the phone and computer when tickets went on sale, and got a couple decent seats.

Brady and I listened to a lot of Bruce in the weeks leading up to the show, so he would know the music. He loves to sing along.

Finally, the day came. If I had drawn up how I hoped the concert would go, I couldn't have done any better than the actual event.

We got to Seattle in plenty of time, and while it took a while to find a place to park, we found a spot in a neighborhood, so didn't need to pay. It was a bit of a hike, but downhill all the way.

We went to the food court at Seattle Center for dinner, then walked over to Key Arena. We got to our seats and watched the arena fill up.

At 8:10 the band came out, followed by Bruce, and he began what was an almost four-hour show. It is hard to put into words how amazing it was.

I've seen Bruce 12 times, and I've never seen him better. His energy was unbelievable. At 66, he could easily play for 2 hours and be done, and no one would complain. But he continues to give everything he has. What he does, night after night, is almost superhuman.

Bruce opened with "Meet Me in the City", then played the 20-song River album from 1980. It is an incredible album with many classic Springsteen rockers, including "Hungry Heart," "Cadillac Ranch," "Ramrod" and the title track. After playing the album, Bruce then did another 14 songs, all fan favorites, mostly from the 70's and 80's.

It was a magical night. I have never felt more energized, more inspired, more fully alive than I have at Springsteen shows; 12 times over the last 32 years. Each one has been amazing--and after that many years and shows, Bruce's music has become the soundtrack of my life.

Each song takes me back to a different time and place in my life (I'm going to write a series of posts on the times I've seen him live).

I've probably seen close to 100 concerts, and nothing compares to a Springsteen show. I think this one was the best of all.

The show started at 8:10; about the time Brady is usually getting ready for bed, and lasted till midnight. For almost four hours, Brady and I sang and danced and laughed.

I loved watching Brady jump up and clap and yell and dance to his favorite songs. Joy is even better when it is shared, and it was so wonderful sharing that joy with Brady.
Posted by Todd at 10:00 PM No comments:

Beautiful moment tonight with Brady. Brady's favorite game is Clash of Clans. We don't allow him to play the violent video games that some of his friends do, and he struggles with that. He understands why we don't, but it is hard when his friends talk about games that he is not allowed to play. It's always hard when it feels like you don't quite fit in.

But he loves Clash of Clans, and plays it every day. Today he got into some trouble with the game--not for being deliberately disobedient, but for making some choices without thinking. We've told him not to share ANY personal information with others he plays online with, and today, he did that--nothing specific or revealing, just a little about himself.

Because that's a safety issue, Jamie and I are pretty strict. We decided that Brady was going to lose his game privilege for a few days (and that if he ever shares personal information again, he'll lose it permanently).

I sat down to explain to Brady what we were doing and why. I was prepared for the tears and anger that sometimes come with his consequences, but Brady listened calmly. I could tell he was upset, but he didn't lose composure. He understood. He knew that we were disciplining in love, not out of a desire to make him miserable (of which he sometimes accuses me when he's really upset).

I was so proud of how he accepted his consequence; even though he was upset. He asked me a few questions, and we moved on to reading time. Usually at bedtime I read to the boys, but tonight, I asked if Brady wanted to read to me from his current book, Where the Red Fern Grows.

He read to me--beautifully, with feeling and power and innocence--a story I have read probably 20 times myself.

The beautiful, endless grace of God.
Posted by Todd at 10:37 PM No comments:

I am surprised we are still reading about Christians arguing that not allowing them to discriminate is restricting their "religious liberty." I am disappointed and embarrassed by Christian business owners fighting for the right to refuse service to people they don't agree with. Now we have several states trying to pass laws that allow businesses to discriminate under the guise of "religious liberty."

Saying it violates your religious liberty to serve someone with whom you don't agree with is ridiculous. How is your religious liberty violated by making a cake for someone who is gay? No one is asking you to be gay. No one is saying you have to agree with the gay people you are doing business with. No one is saying when you make this cake you must profess your support for gay people. It's a cake! It's not a religious statement--but it could be, in a very different way.

If you are a follower of Christ, you violate the principles of your faith when you refuse to serve someone. Jesus never said separate from the world and only interact with those who are like-minded. Jesus said over and over to love your enemy, feed the hungry, heal the sick, give your shirt, walk a mile with someone...serve your fellow man.

It is sad that many would rather turn their back on someone, because they don't agree with them, than take the opportunity to bless someone's life.

If the goal is to point people to Jesus (and if you call yourself an evangelical Christian, it should be); than which accomplishes this better:

1. Refusing to serve someone because you think they are wrong, or...

2. Moving into someone's world and providing them exceptional service, or selling them a top-quality product, or serving them with kindness--showing them that Christians love people and do things with excellence and want to love and serve and invest in the lives of all people?

Seems pretty clear to me.