The pictures below show what each of my boys did at the Burlington All-Comers Track Meet this summer. Over three weeks, the boys ran every Wednesday night against other kids their age. 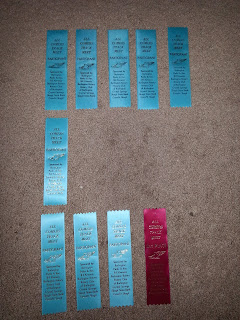 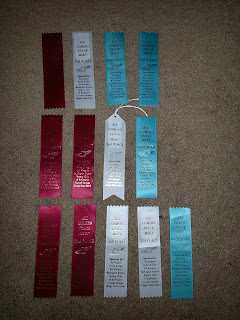 All runners received ribbons--blue, red or white for the top three in each age group, light blue "participant" ribbons for everyone else.

Looking at the two pictures, it looks like Cash achieved more success. He placed second or third in most of the races he ran, from the first meet. He was really excited and ran very fast.

Brady, who just turned 7, was running against 7 and 8 year olds, and was often one of the smaller kids in his races.

At the first meet, Brady ran his best, but was never able to break the top three for a red, white, or blue ribbon. He did receive 4 participant ribbons, while Cash had one 2nd place and one 3rd place ribbon. Brady was disappointed he didn't do better.

At the second meet, we talked about him running some longer races. In the first meet, both boys ran the 50 meters, the 50 meter hurdles, and the 100 meters. I encouraged Brady to run the 200 and 400, thinking he could do better in the races that depended less on speed, and more on endurance.

But at the second meet, Brady got anxious and didn't want to run at all. He watched Cash run race after race, earning even more ribbons, and he kind of shut down and didn't run at all after doing the softball throw.

I was really disappointed. I didn't care about him winning, but I didn't want him to quit. I didn't want to see him give in to fear. I wanted him to be brave and do his best, even if it didn't turn out the way he wanted.

All those desires are good, but I let it frustrate me more than I should have.

It was a great lesson in realizing that our kids are their own people, and make their own decisions. I had to let it go.

I tried to encourage him, telling him that winning wasn't what mattered, but trying. Doing his best.

Going into the last meet, Brady had a pretty good attitude, and seemed ready to try again.

The last event Brady tried was the 400. One full lap. Too long to sprint. He started off well, pushing his way to the inside and looking strong for the first 200 meters. Between 200 and 300 meters I could see he was getting winded and tired.

I was running along the infield, yelling encouragement to him.

"Keep pushing Brady! Don't stop! Run as fast as you can, now, all the way through!"

On the last straight I could see he was hurting. Another runner pulled alongside Brady, and looked as if he were going to pass him, but Brady found another gear and pulled away. He crossed the finish line in second place.

As I watched the race official hand him the red ribbon, tears filled my eyes.

I was proud that he ran his best and never gave up. I was happy for him that he earned a red ribbon, knowing how important that was to him.

I love being a dad.